The territory of San Casciano is already inhabited in Etruscan times as shown by the finds of montefiridolfi (Tomb of the Archer) and valigondoli (excavations of Poggio La Croce). In Roman times it was a post station (mansio) at the tenth mile from florentia.

The name Decimo that still binds to the parish church of Santa Cecilia a Decimo, near San Casciano Val di Pesa, mentioned already in 1043, is the memory of a milestone (decimum lapidem) of an important Roman road, Maybe the one that was supposed to unite the colonies of florentia and Sena Julia. Archaeological finds and toponomastic stratification attest to the antiquity of the settlement, whose density seems to be confirmed by the presence on the territory of four parish churches (besides Decimo, San Pancrazio, Sugana and Campoli) and a large number of churches which depended on them, concerning the various “peoples”. This dense humanization, which today distinguishes the landscape of the countryside around San Casciano, was certainly taking place already in the Middle Ages, supported in a first time to the numerous castles that are documented as infeudati to the Florentine episcopate or to powerful consorteries, such as the gherardini, buondelmonti and the riding, and that today appear transformed in villas-farms (Bibbione, Castelvecchio, Fabbrica, Lilliano, Montefiridolfi, Montepaldi, Pergolato and others) or downgraded to rural dwellings (Argiano, Castelbonsi, Montauto, Monteclavi, Montecampolesi, Montefolchi). 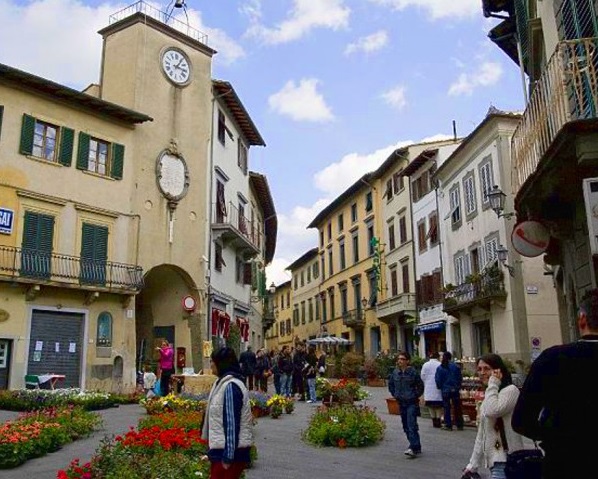 San Casciano was originally mentioned as a feud of the Florentine bishops, who in 1241 granted the first civil statutes. Later, in 1278, the administration passed to the Republic of Florence. Shortly thereafter it became the chief town of a League and therefore of a Podestà comprising also the League of Campoli, for a total of more than forty “peoples”. The importance reached by San Casciano is such that, in the Statute of the Podestà of the Municipality of Florence of 1325, one of the main roads that leave the city is called “road for quam itur ad sanctum Cassianum”, which is then the one that leads “versus civitatem Senarum et versus romanam curiam”. That then San Casciano was intimately. This is shown by its urban form, originated by a crossing of roads: the one mentioned and another that, with the prevailing trend of the ridge, covered the hills to the right of Pesa, from Chianti to montelupo, on the Arno. However, the key to its development was also the growth of agricultural productivity linked to the affirmation of sharecropping, which accentuated the spread of scattered settlement and the formation of exchange centres, which market and the castle of San Casciano “a Decimo” which assumed the characteristics of large “walled land”, equipped with strong defenses immediately after the middle of the fourteenth century, still today widely attested.

In the first half of the fourteenth century in fact, deprived of any defense, San Casciano became prey to commanders and captains of fortune. It was first occupied by Arrigo VII Emperor from November 1312 to January 13, 1313 then by castruccio Castracani who in February 1326 sacked the village and burned it, finally in July 1343 by Fra moriale. As a result of these facts, the Florentine Republic decided in 1354 to fortify the village. The walls of a vaguely polygonal shape were ready in 1355 and a formwork, partly still existing, was added in 1356 to guarantee greater defence. Previously the Duke of Athens had planned to turn the village into a castle to be renamed “Castel Ducale”, but the project passed together with its creator. In 1420 Sancasciano hosts Pope Martin V at a property of the Carriers, called La Torre, leaving you in thanks an indulgence called “Pardon” to be celebrated every 15 September in the adjacent chapel dedicated to Saint Mary of Peace]. In 1494 Charles VIII, King of France, camped near the village without entering. Before leaving, however, he made a large donation to the local Franciscan monastery. In 1512 at L’albergaccio (locality Sant’Andrea in Percussina) began the exile of Niccolò Machiavelli and it was in that period that he was able to write his most famous works as The Prince and The Mandragola. With the birth of the Grand Duchy of Tuscany ceased its military function and history followed the regional one. In 1880, after the Grand Duchy of Tuscany had left the Kingdom of Italy, the voters of San Casciano elected that Sidney Sonnino who would then become President of the Council of Ministers from 8 February to 29 May 1906 and from 11 December 1909 to 31 March 1910. A few years later, in 1891, San Casciano was connected with Florence by the now disappeared steam tramvia, wanted to give a rail connection to Florence also to the Chianti area, which had been excluded both from the Central Railway Tuscany (Florence – Empoli – Siena – Chiusi) and from the railway Florence – Rome.

On July 26, 1944 San Casciano suffered a devastating Allied bombardment which, together with German mines, reduced the country to almost rubble. Slow and not everywhere rigorous was the reconstruction.

The Oratory of the Conception, the only building not rebuilt after the bombings.