Since the Middle Ages, Greve’s history has been linked to its main square, which has always served as a market. The village was a simple dependence of the Castle of Montefioralle but due to its location, is located at the point where the roads connecting the Valdarno, Val di Greve and the route that led from Florence through the Chianti Hills to Siena, became the main market in the area. 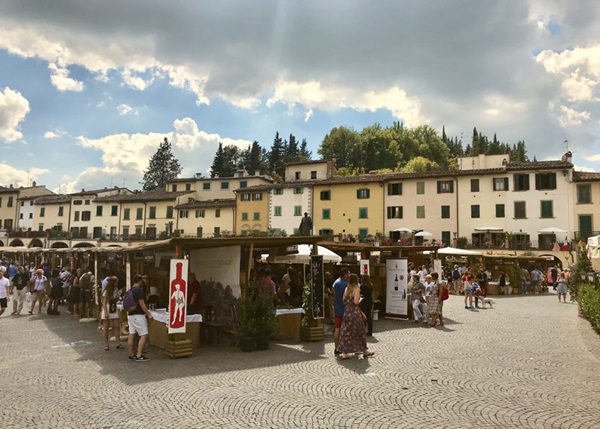 The square with the characteristic shape of an elongated triangle is largely surrounded by arcades and in the centre there is the statue of the sculptor Romeo pazzini portraying Giovanni da verrazzano. One of the top of the square is occupied by the parish church dedicated to the Holy Cross (19th century).

«(…) the Florentine Republic divided, and the Medici Grand Duchy preserved the political district of Chianti in three thirds, that is, Third of Radda, Third of Gajole and Third of Castellina, known relationship to the military disposition with the name of Lega della Castellina del Chianti and relationship to the civil power dependent on the power of Radda, then subordinate to the Vicariate of Certaldo, while that of the Community of Greve at the same time depended on the Vicar of S. Giovanni in Val d’Arno.»
(1833, Emanuele repetti Dictionary Geographical Historical Physical of Tuscany)
Among the places of interest we have the castles of Uzzano, Canonica, Mugnana and Verrazzano, in addition to the village of Montefioralle and S. Lucia a Barbiano with the castle already stronghold in the city clashes between Florence and Siena. From the nearby convertoie you can enjoy an excellent view.
INTERACTIVE MAP