Mugnana Castle is one of tourist’s favorite starting point for excursions in the hills and surrounding valley, the Sezzate River valley, along which there are visible remains of the ancient Roman road that connected Florence with Valdarno.

This was an important means of communication, due also to the presence of a Roman bridge near Ponte agli Stolli (Stolli Bridge) and castles such as Mugnana and Sezzate, on the opposite hill, that controlled all comings and goings. 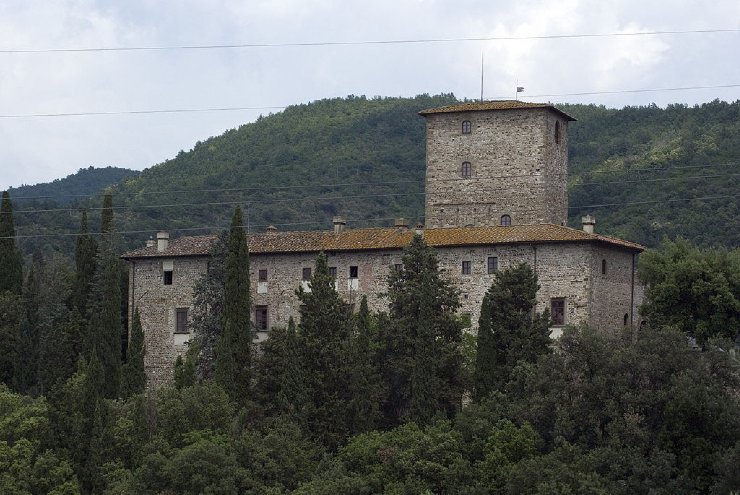 The tower and the walls of the castle were built at the beginning of the tenth century by the Longobardi. Its strategic position made it the most important fortress, first for the Lega di Cintoia (Cintoia League) and later, for the defense of Florence. It was within the castle’s walls that in 1198 an agreement was reached that gave birth to The Tuscan Leagu.

The fortification works are quite remarkable; a thick walled circuit with an imposing tower is present in the centre. Originally this was about sixty meters high but it was later lowered for military purposes.In 1200 the Mugnana stronghold came into the possession of the Alamanni family and then it passed to the Bardi di Vernio family, who gave the castle its present day structure, adding the loggia (open gallery) and the courtyard.

The castle was damaged by Siena’s allies the Aragons in the war against Florence (1530) and in 1896 by an earthquake. The castle is also famous for its production of wine and oil.

Although Mugnana Castle has undergone various modifications over time its medieval characteristics have been preserved and have been the subject of many literary publications that have always greatly valued its architecture, praised its wines and appreciated the beauty of its surroundings.