The area around the capital has been inhabited since 2000 BC, as demonstrated by the archaeological area of Poggio la Croce where the remains of an ancient village have emerged and where, during the excavations carried out in the last decade, many finds have been brought to light. Later, even if very few traces of this have emerged, we can assume the presence of an Etruscan village. By the fall of the Roman Empire of the West, in the 5th century, in the area had already formed small rural agglomerations that still exist today; these villages were castles, Monterinaldi, Volpaia and Radda itself.

Between the ninth and tenth centuries the Radda area saw the birth of the feudal society that involved the division of the villages. The first certain document in which Radda is mentioned is a diploma in 1002 in which the emperor Otto III confirmed the donation made by Countess Willa in favor of the Badia Fiorentina. The locality Radda appears in many documents of the Badia Fiorentina until the 12th century. In a document of the Badia a Coltibuono of 1041 is reported Ramda judicaria fiorentina et fesulana.

On May 25, 1191 the Emperor Henry VI granted the castle of Radda and his court as a feud to the Guidi Counts, the same fief was again confirmed by the Emperor Frederick II, even if already in the XIII-th century the territory of Rada is dependent on Florence. The castle was sacked by the Sienese in a raid in 1230 while in 1268 it was occupied, along with other localities chiantigiane by French troops led by Charles I of Anjou. A new job and a

Administratively Radda was the capital of the Chianti League, including the tertiaries of Radda, gaiole and Castellina. From the end of the XIII-th century it became the seat of a Podestà appointed by the Florentines and in the town statute of 1415 Radda was confirmed as the capital of the League. Among the podestà of Radda is worth noting Francesco ferrucci.

In the 17th century, when the conflicts were over, the castles were transformed into villas where the owners dedicated themselves to the production of wine. Radda in Chianti was visited in 1773 by Grand Duke Pietro Leopoldo who found it far from everything. As a result of the visit the roads were improved but the territory of Radda was always poor and isolated

I’m on lock down. The affection for the Habsburg-Lorraine dynasty remained however strong for a long time, considering the fact that at the plebiscite of 1860 for the annexation of Tuscany to Sardinia, Radda voted against (281 yes out of 581 voters, out of 879 entitled).

This situation culminated in the fifties when the depopulation of the countryside, a phenomenon common to many areas of Chianti, reached its peak. In the seventies began the rediscovery of these places and slowly all the castles, villas and individual farmhouses have been restored and there have been established agriturismi and farms. 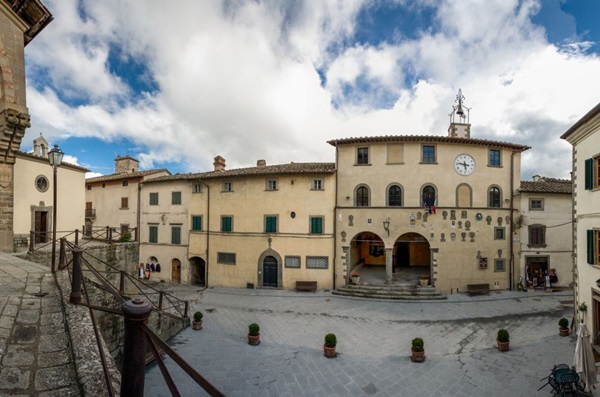 The town of Radda is enclosed within the walls partially preserved. The old town centre has an urban plan consisting of a main road, on which the small square on that façade opens both the Palazzo del Podestà and the parish church; from this main road axis depart other minor roads that make up a ring. Thanks to the fact that the urban plan of Radda has not known changes in the course of the centuries its civil houses have maintained the medieval structures that were brought to light only after the restorations carried out towards the end of the 20th century. A building on the back of the church is engraved on the facade the date 1479 ; in the village there are also the Palazzo minucci and other palazzotti all made between the six-eighteenth century. Within the capital there are several places of interest: Radda in Chianti in the fifteenth century had a remarkable strategic importance; this led the Republic of Florence to equip the village with a defensive structure in masonry. A first circle of walls was built in the fourteenth century but it was after the Aragonese wars that the defensive structures were strengthened, especially after 1478, when Radda was conquered and sacked. Work continued until the early sixteenth century. Of the walls today remain short stretches and some towers, the best preserved is the one overlooking the public gardens. he course of the wall today is not easy to follow because of the construction that over the centuries were leaning against it but following the structure of the village you can sense the development of the walls; However, the two access doors have disappeared.

Palace of the Podestà
The palace was built in the fifteenth century and was almost completely destroyed in 1478 during the second Aragonese war. To the primitive building is ascribed the portico that belongs to the modes of the Florentine minor architecture of the early fifteenth century. To the reconstruction after 1478 belong the windows of the first floor. The building was enlarged in the 18th century when the second floor and the prisons were built.

The Captain of the Chianti League was present in this palace for four centuries. On the main external facade are walled numerous coats of arms of the various podestà that have alternated in the course of the time; the coats of arms are 51 and these 3 date back to the XV century, XXV to the XVI century, 16 to the XVII and VII to the XVIII century. Below the loggia is the coat of arms of Francesco ferrucci podestà in 1527 and a fresco of Florentine school dating back to the sixteenth century.

The Grand Ducal Glacier
Glaciers were built in various parts of Tuscany during the Grand Duchy.
Many had the pyramidal shape, like the one in the Parco delle cascine in Florence, others like this one in Radda were made in the shape of a cone trunk and basement. Snow was pressed in the ice during the winter; thanks to the construction technique, the snow was turned into perfect ice blocks at the north exposure. The glacier of Radda in Chianti is located outside the medieval village, near the municipal gardens and now houses a shop.