The area of Panzano was already inhabited in Etruscan times as shown by the finding of a stele dating back to the VI – V century B.C. near the parish Church of San Leolino, stele then dispersed. Also in Roman times the area was densely inhabited, of that period have remained numerous traces in the place names including Panzano himself. At the beginning of the X-th century the Pieve di San leolino a Flacciano was mentioned, then it became Panzano.

In the twelfth century there is the first testimony of the name Panzano that is mentioned in the plebs sancti leolini sitam in Panzano while in the tenth of the thirteenth century is also cited the church of Santa Maria placed in the castle. The castle of Panzano had certainly already developed before the 12th century and was one of the possessions of the Firofidolfi family. There are not many traces of the castle’s history. In the middle of the XIII-th century when the Florentine countryside was organized in the leagues Panzano was included in the League of the Val di Greve. After the Battle of Montaperti in 1260 the castle was sacked and it had destroyed two towers by the victorious Ghibelline troops. During the war that opposed Florence with the Visconti of Milan Panzano, in 1397, was occupied and again sacked by the troops of Alberrico da barbiano.

In 1478, the Sienese troops and their allies, the troops of the King of Naples Ferdinand II of Aragon invaded Chianti for the second time. On that occasion the castle of Panzano was one of the most important bulwarks in defence of the Republic of Florence and became the seat of the Commissioner of the Republic. After the fall of the Republic of Siena in 1555, Panzano will no longer be involved in war events until 1944. 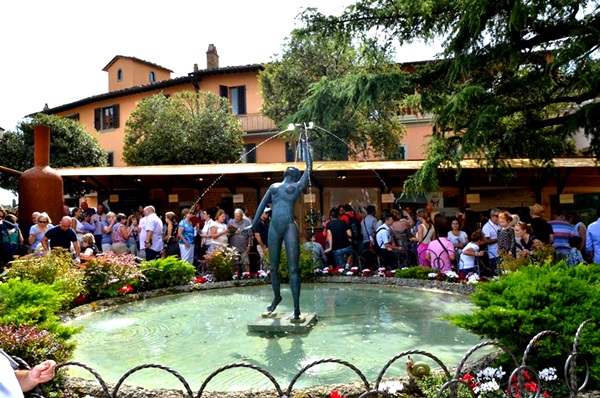 Monuments and places of interest

Torre del cassero
The castle is the highest and the oldest part of Panzano. A large part of the walls surrounding the hill are still preserved; on two sides, however, they have been reduced in height while in the south-east they are completely missing. There are also some corner towers among which one has been reused as a bell tower of the church of Santa Maria while another still retains the apparatus to protrude.

The internal structure of the castle is simple; from the only access door, which originally may have had an antiporta, through a single road you get to a small square on which the formwork faces. The formwork consists of a high tower that rises higher than all the other buildings. Inside the castle there are other interesting buildings including the one next to the entrance door that has a clear medieval character. All the buildings of the castle for the accuracy of the wall and for the style of the archivolts date to the XII century the structures of the castle of Panzano. Built and always belonged to the firidolfi family or Panzano (who, according to some authors, have given the name to the present Via panzani in Florence)in the middle of the 19th century it passed partly by succession and partly by the Counts Mancini to the family Buoninsegni (then good citizens) to which it belonged until the second half of the 20th century. Just outside the castle was the ancient church dedicated to Santa Maria which was replaced by the present one at the end of the 19th century.

Borgo di Panzano
Outside the castle, along the access road that follows the ridge of the hill, already in the twelfth century is ascertained the presence of a village as reported in a document of 1146, burgus de castro de Panzano.
The village and the castle form what is currently the so-called Panzano Alto. The village of Panzano is divided into two streets that start from a small square go up parallel to the castle. Among the buildings of the village some show characters referring to the seventeenth or eighteenth century although from below some falling plasters overlook medieval structures. 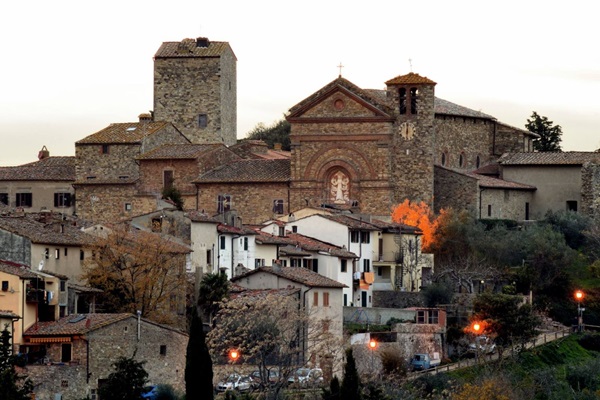 bell
The area called Campana is the one that stands at the foot of the Panzano hill at the intersection of the hill road that winds along the watershed between Greve and Pesa, joining through a very scenic route the two localities on the edge of San Casciano in Val di Pesa on one side and volpaia on the other passing through the Castle of the shanks, and the via chiantigiana that leads to Radda in Chianti and Castellina in Chianti, (Campana Pass 480 m a.s.l.). Its name derives from the shape of the square [gastone bucciarelli] which seen from above resembles a bell.
The bell was also mentioned in the Charter of the Captains of Part Guelph realized at the end of the XVI century; in that map is called Piazza Panzanini and on the square still existing today

Conca d’Oro
Conca d’Oro is the part of Panzano, which faces and descends on the wide valley of the river/Pesa river; hence a landscape as far as the eye can see of the woods, vineyards and olive groves of Central Tuscany. The name Conca d’Oro refers to the shape of the hillsides at that point, a basin, once completely cultivated with wheat (golden) and where today the vineyards of Chianti Classico (the Chianti gold) are extended.
INTERACTIVE MAP