Inside the  tortura museum  , a beautiful and unique collection of  genius Leonardo da Vinci, made with art and wisdom by Florentine artisans.War machines built from the designs of genius, life-size and functional. 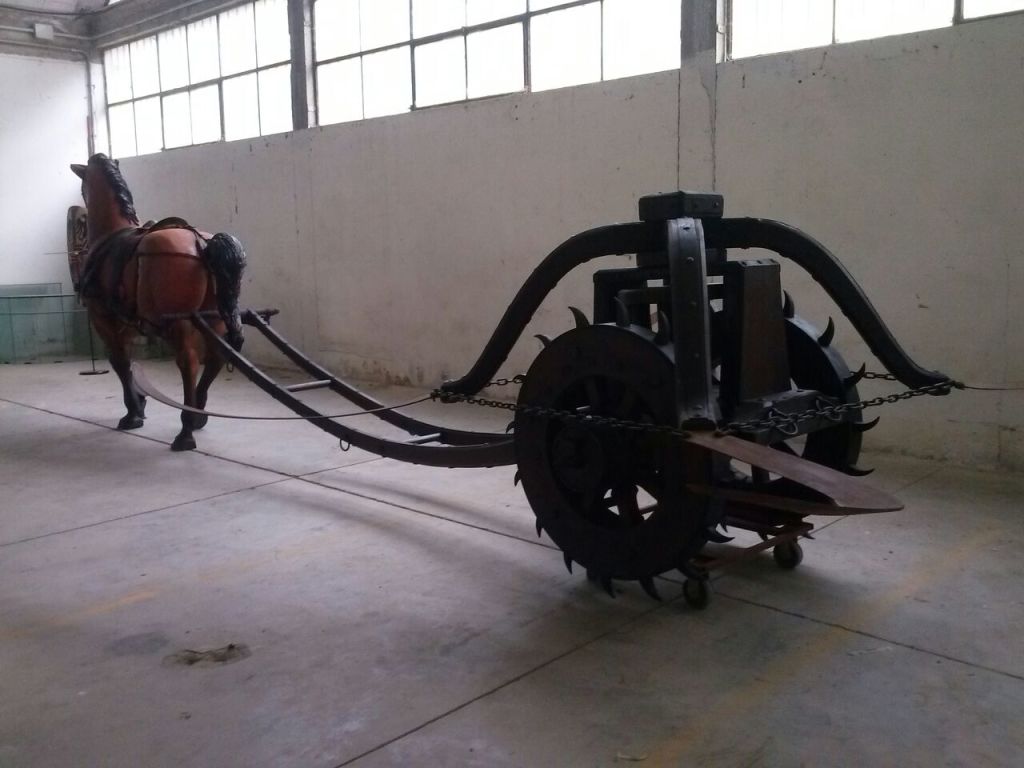 Pulled by horses in the race, these carts, equipped with sharp blades moved into the fray and hit to death anyone should happen next.
The wagon cutter, is a deadly weapon combat country of ancient tradition. 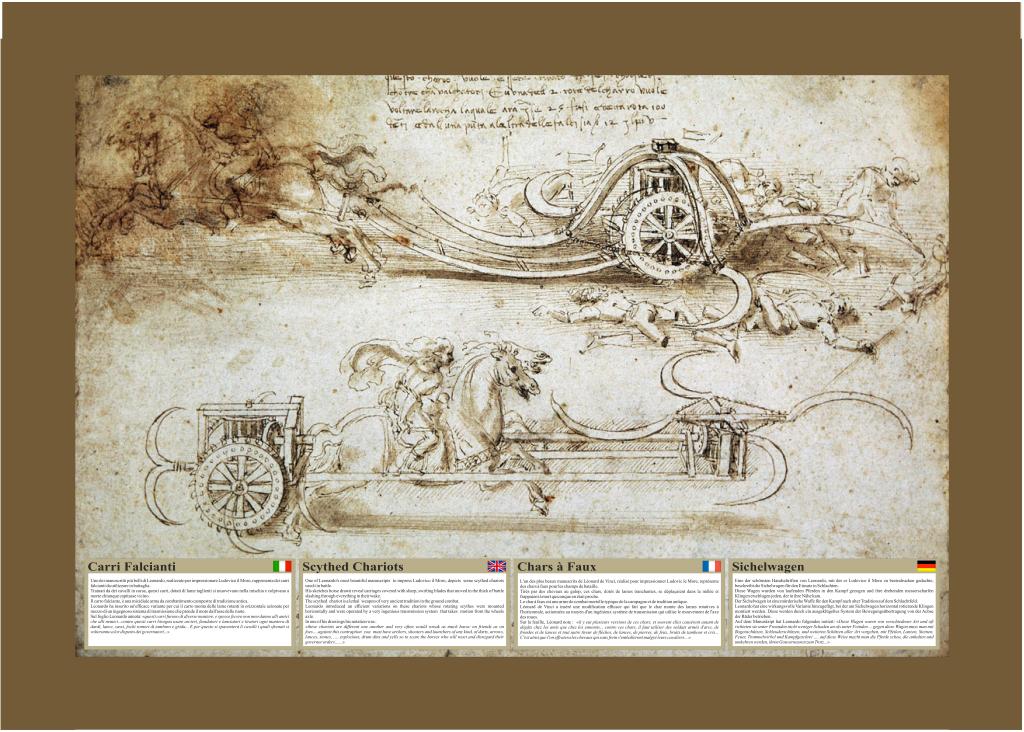 Leonardo has for an effective variant for which the wagon mounts of the rotating blades horizontally operated by means of an ingenious system of transmission which takes the motion from the wheels.
On the sheet Leonardo notes: “these wagons were of different ways, and often did not give men friends that alli alli enemies … against these wagons have to use archers, shooters and pitchers fiondatori and all manner of darts, spears, stones, fochi rumors drum and shouts … and for that you will scare them wild horses which will turn to their defiance of Governors … “ 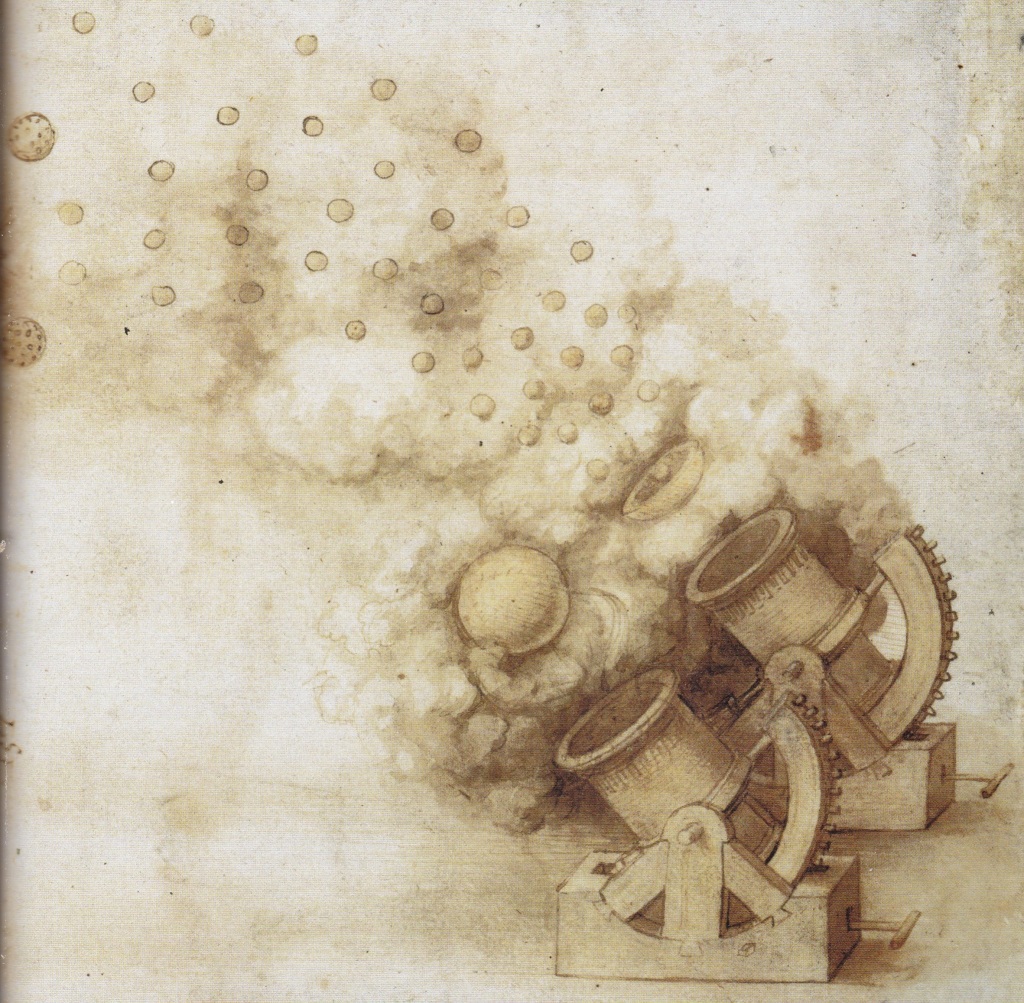 The sheet shows two bombards shooting right in the moment of the explosion stroke.In addition to the project of the bombing, the structure already known at the time, Leonardo also believed to big explosive shells that, once launched, can be divided into several parts; compounds by other balls explosive and thistles metal, with the dual purpose of filling the spaces between ball and ball inside the casing in thick skin and cause greater damage with the effect splinter; thus covering an area of greater impact and amplifying the damage to the enemy ranks. 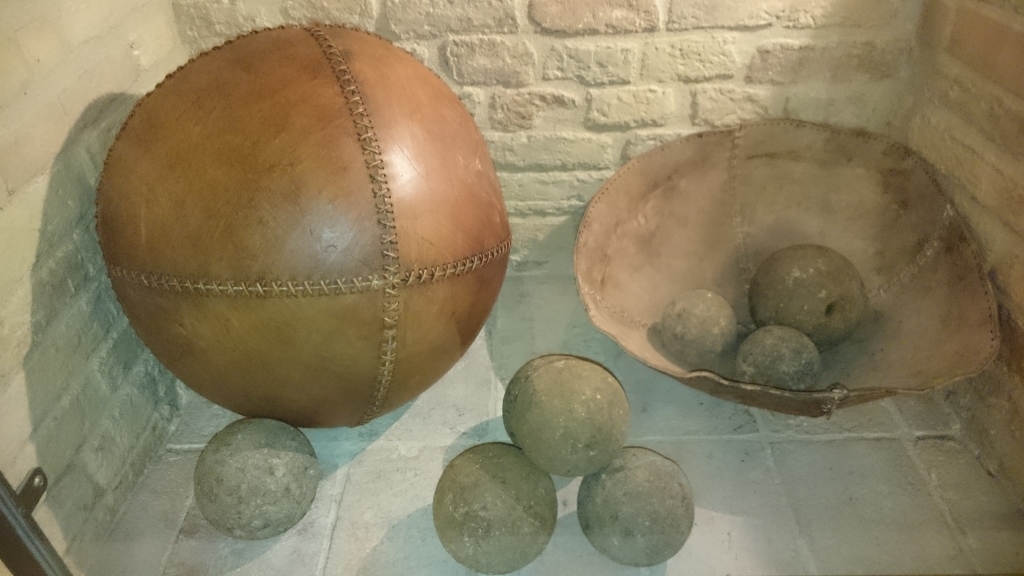 REALIZATION of The BOMBARDs 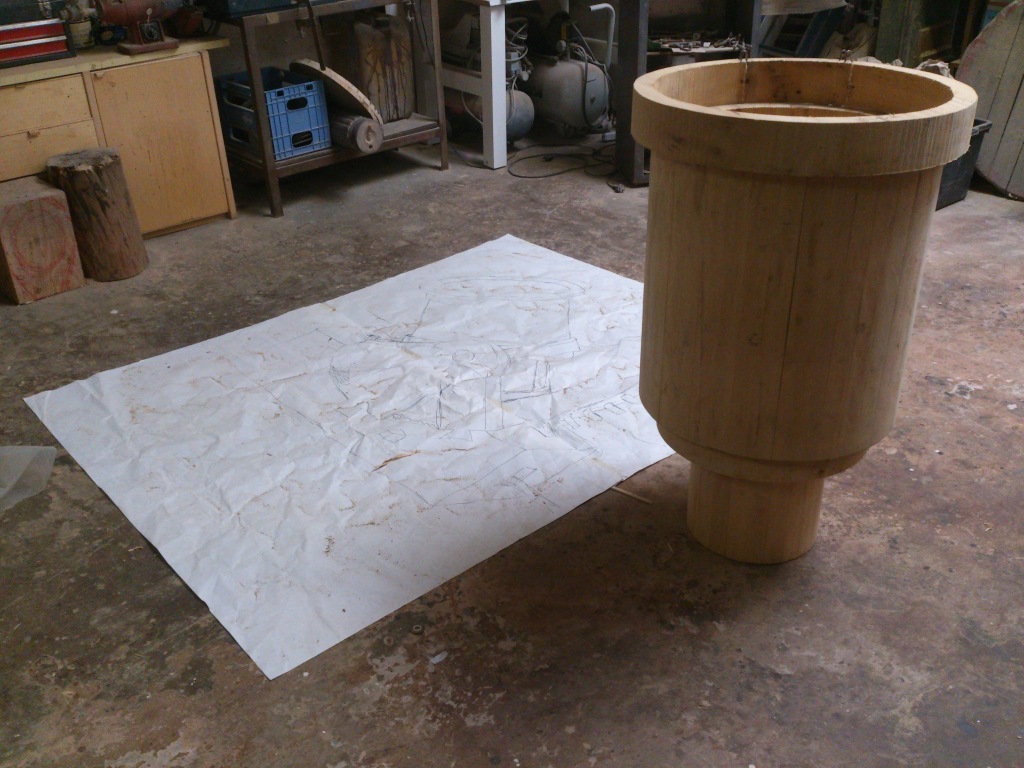 The two drawings represent two more mortars “trestle” and “cloak” . The solution of Leonardo allows to vary the height of shooting easily by moving the latches along the dial perforated and move the gun laterally supported on a guide provided with tooth and groove. 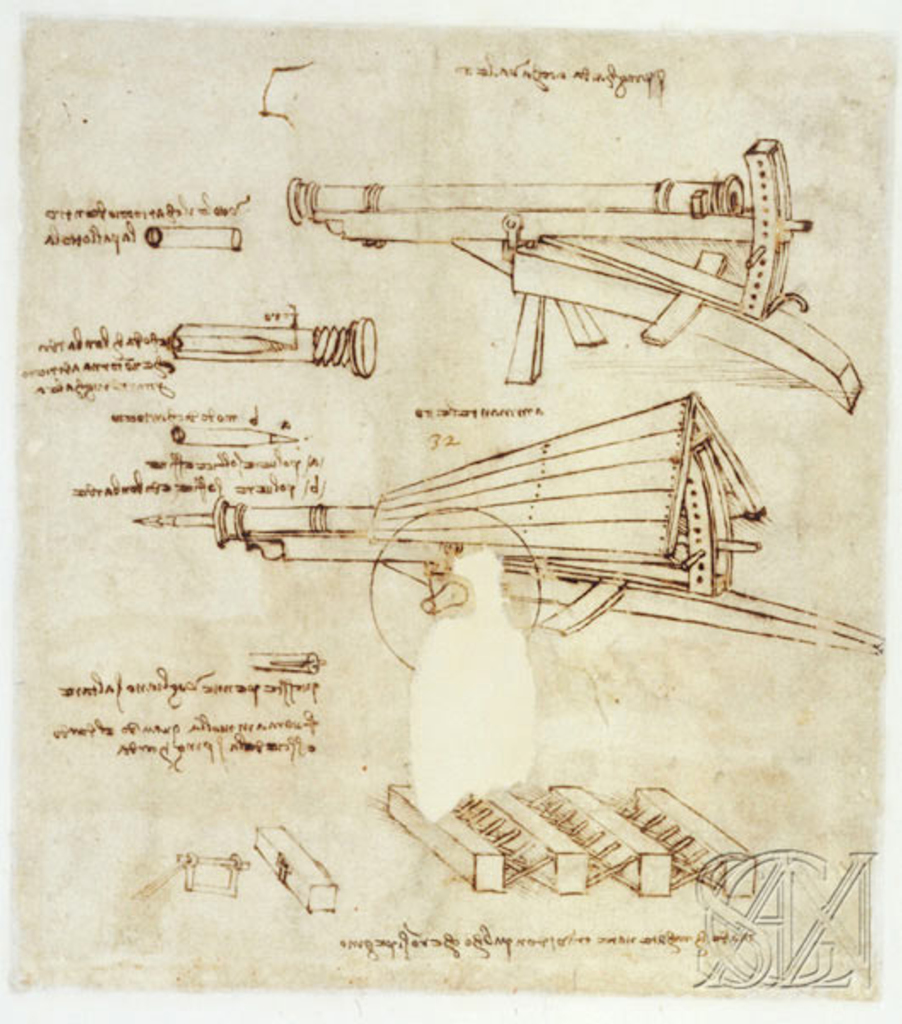 The drawings depict minors two shells with gunpowder, top «wants the bag inside the bullet“; a queue of bombs “that does not come back to dirieto to take in galley” (the galley was the typical warship used in the Mediterranean from the ninth to the eighteenth century.); Other casing with two types of powder a – b, “mode of foil – to – fine powder, – b – fluffy powder and bombards‘; especially a dart with feathers for spingarda “these pens want to jump fuora spring, when and dart out of spingarda»

Leonardo in another note says it can build a spingarda composed of various sections for better transport and reassemble where necessary, “once, Because of this make a bomb of 40 pieces, and remains as one piece. Female–Male–Male–Femena » 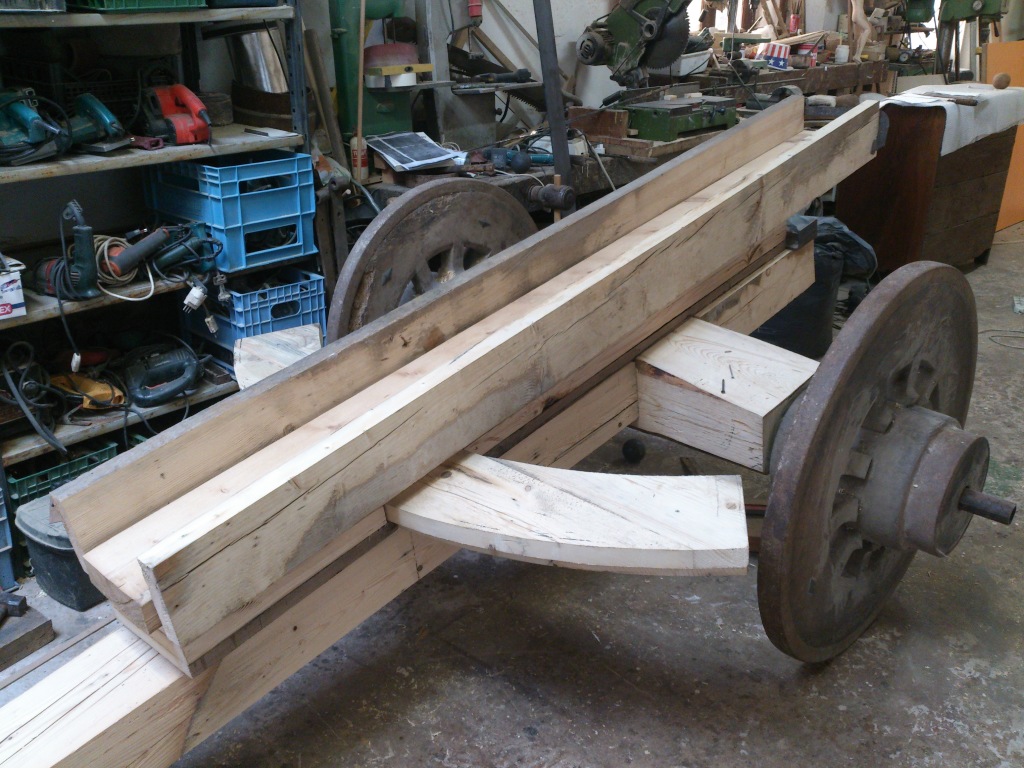 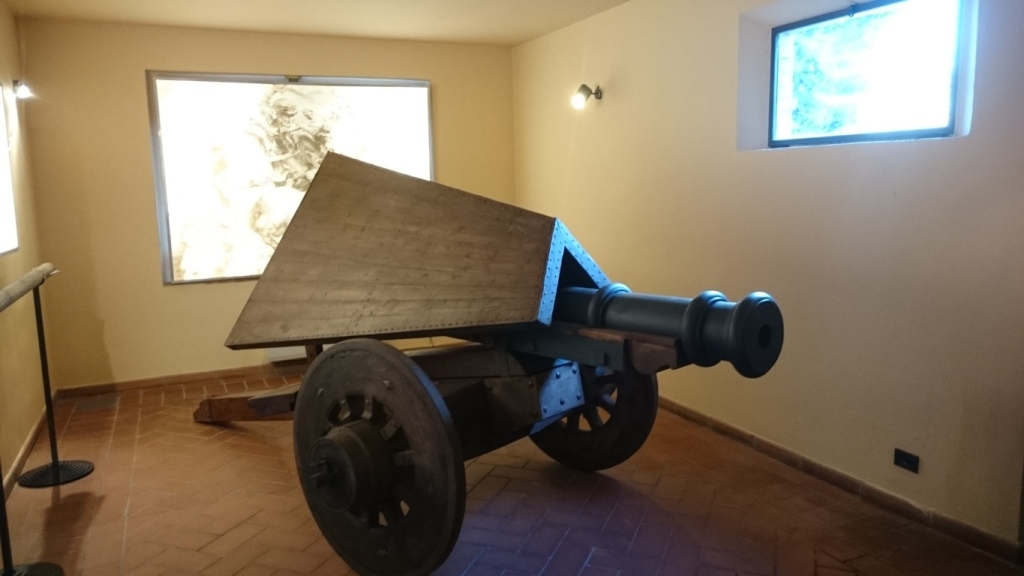 Shields armed
In these drawings Leonardo elaborates the theme of weapons for soldiers walk by combining into a single element throwing weapon like the bow and crossbow and an object as a defense shield. 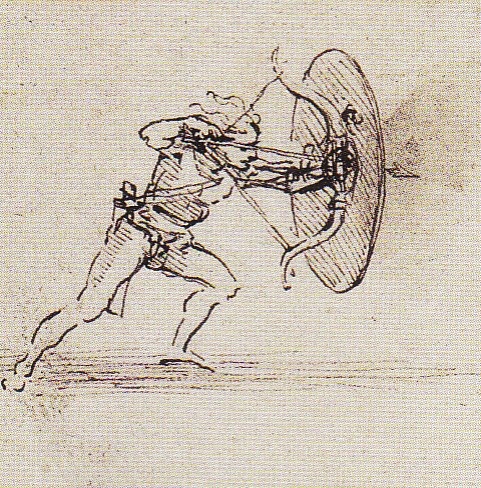 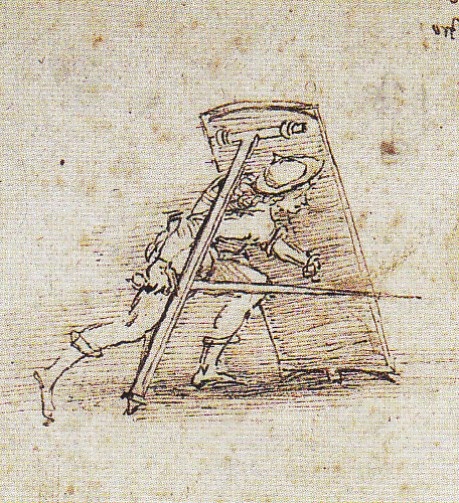 In addition to designing a shield large enough to be used as protection from which they hurl the attack with weapons.
In the original design, also a study of an explosive ball

Polearms Swords Maces
In these drawings Leonardo offers a series of pole arms and lance shaped elaborate and imaginative all changes to existing weapons to try to improve and make more effective and efficient the damage they can cause to the enemy ranks.
In the drawings, there are also a few sketches of swords, sticks and bags to carry them.
We also find two sticks to increase the distance of stone throwing and / or metal bullets. 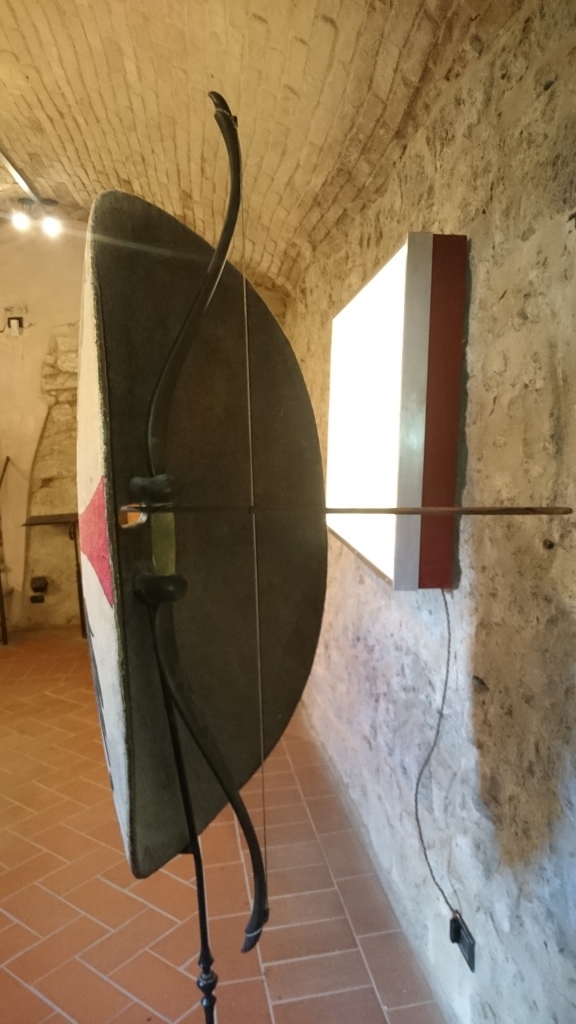 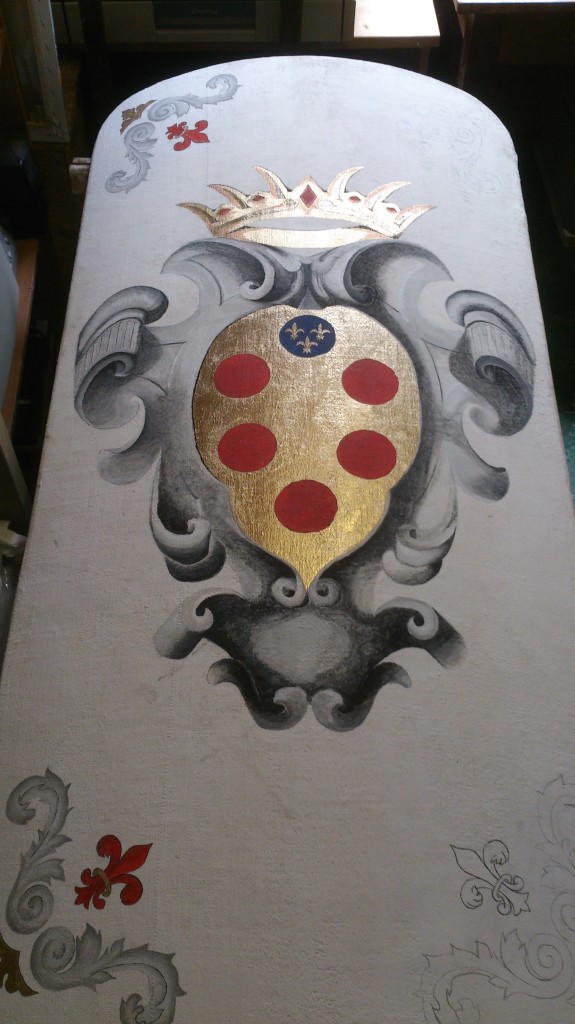 catapult
In a world in which the city had erected massive walls of defense to repel the attacks of countless armies and bands of mercenaries or irregular, the catapult appeared the most common weapon of siege.
Dating back to many centuries ago as an idea, however it catapults Leonardo were characterized by the improvement of mechanisms of launch.
Pensandone of various models, from twin A-arms to launch multiple tension springs.
In his concepts; they inserted in a double-tension system operated crank that could throw stones and explosive projectiles over long distances, making it out of reach of the weapons of the defenders citizens 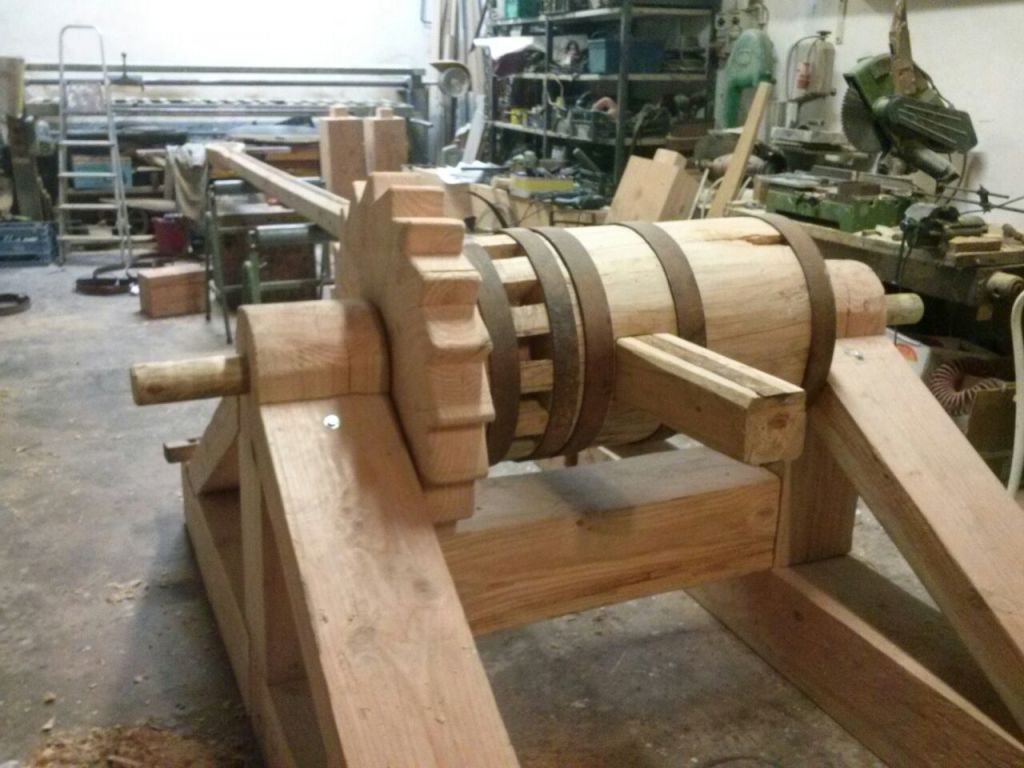 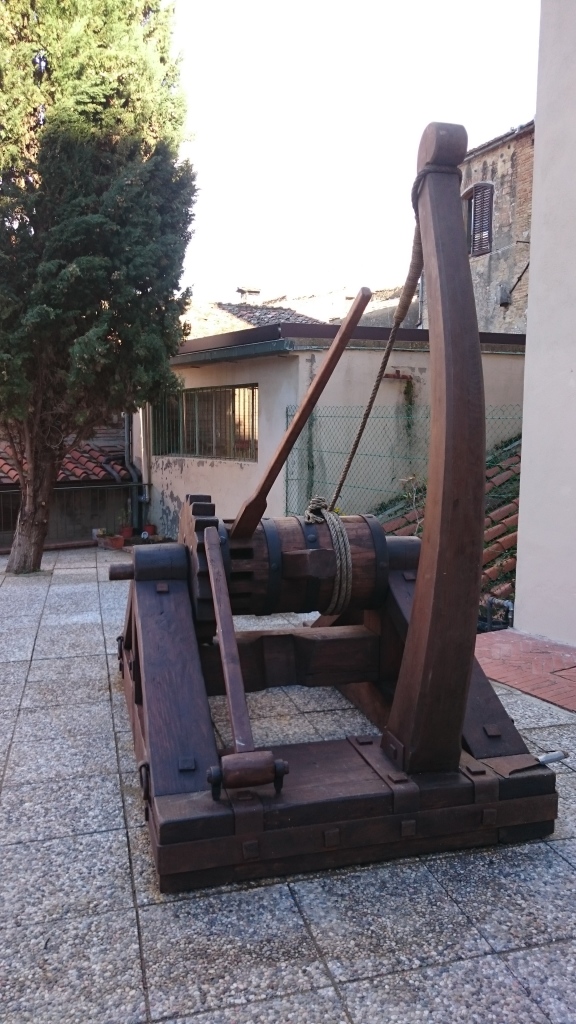 Shield cone reinforced
In drawing Leonardo proposes a system of defense / offense against the knights against infantry.
The cone mounted atop a pole in wood, deflects the spear of the rider giving a chance to the young man to implement its countermove. Project provides a version is equipped with a firearm, other than provided with trident or spear points. 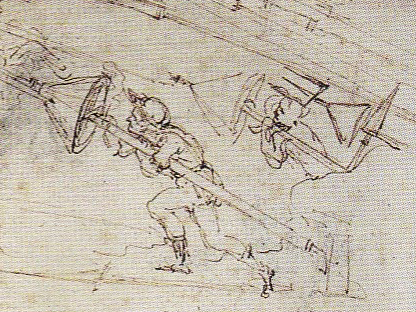 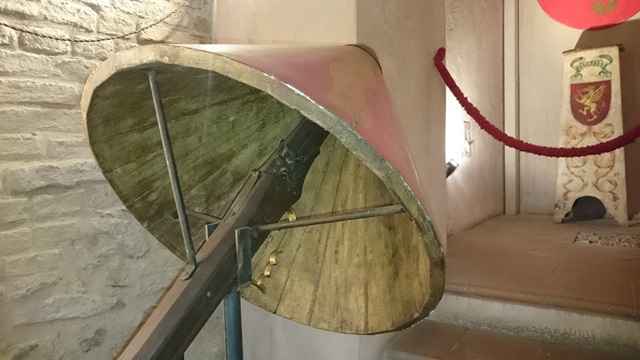 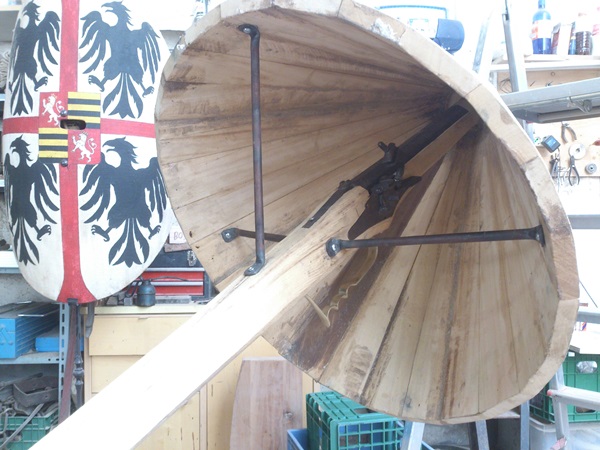 The Renaissance was the period in which the light weapons based on gunpowder taken slowly, but inexorably, the upper hand on the weapon white. 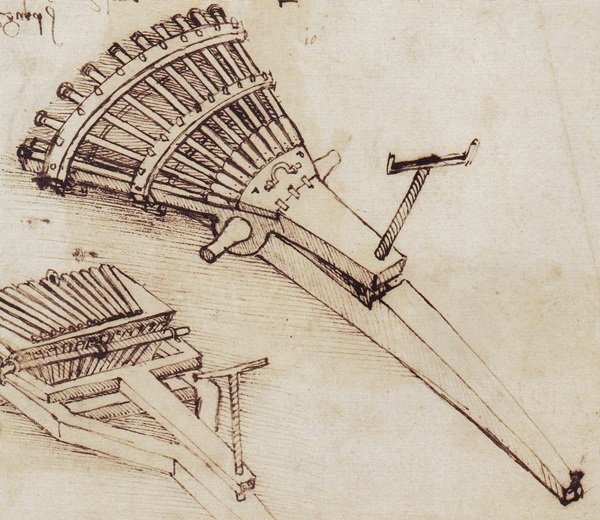 The “gun” of Leonardo (also known as Ribauldequin)
provided different variations, produced a veritable barrage against enemy infantry, usually arranged in line for the attack with spear or for aiming with firearms read.
In the model to “fan”, the machine gun had 12 rods with a feature open layout that attributed the denomination and a crank to change the elevation of the weapon, increasing or decreasing the range.
Another model is the one rotating, with three sets of rods 11 mounted on a support which gave the possibility, by turning from time to time, after firing a first burst, go to the next, increasing speed and volume of fire.1, 2 and 3 – It verses in the barrel a measured dose of powder from launch, coarse-grained; It casts down the ball wrapped in a greasy rag.
4 – Every five or six shots, you sturi hole focone (small hole in the barrel).
5 – you load the wheel in a clockwise direction with the stick until it locks.
6 – It triggers with powder end, covering the periphery of the wheel.
7 – you close the cap by sliding back the cover.
8 – It lowers the dog rotandolo back, so that the pyrite in the jaws is to pose on the cover, pressed down by the spring under the pin.
9 – You pull the trigger. The wheel locks and the cover opens automatically. The pyrite is in contact with the wheel in movement, friction arises a spark that inflames the powder; the blaze ignites through the touch-hole charge in the barrel.Lift the dog
Load the spring wheel using the key
Lower the dog and place the pyrite wheel
Pull the trigger 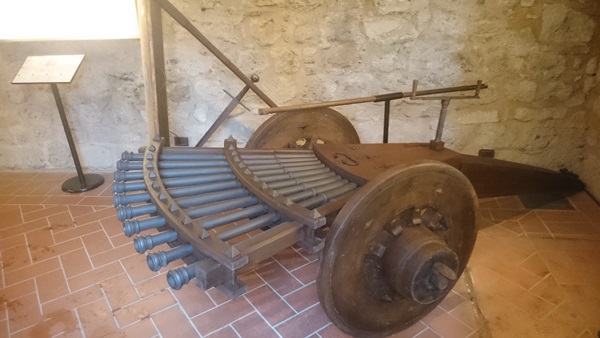 come to visit at THE MUSEUM of TORTURE